The ANTARES project is being carried out in co-operation with the Scientific Society for Space Medicine of the University of Zielona Góra and the SimLE Scientific Circle.

Its purpose is testing the effect of a moderate dose of cosmic radiation on human tissues. The research aims to test whether frequent flights by passenger aircraft can affect carcinogenic processes. Human tissue samples will be sent in a balloon to a height of around 30,000 m. This will allow to expose them to cosmic radiation, the amount of which will be equal to what they would receive during a few flights in a passenger plane.

This is the second stage of this jointly implemented project. The previous one ended with some preliminary research, carried out during a microbiological stratospheric mission. In addition, ground tests were carried out in a vacuum chamber constructed by SimLE.

In the ANTARES project, the SimLE Scientific Circle is responsible for preparing the atmospheric probe and carrying out the stratospheric mission until the irradiated tissue is transferred to the Scientific Circle for Space Medicine.

After the tests, both scientific circles will publish their results. These results will also be presented at scientific conferences, including i.a.: Near Space Conference, Space Medicine EXPO.

For the purposes of the ANTARES project, we have produced two types of printed circuits.

We wish all those young scientists high flying! 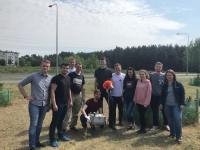 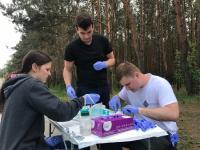