Martyna Kubka is a player of the Miners' Tennis Club "Nafta" in Zielona Góra.

This talented tennis player, despite being only 17 years old, can already boast of exceptional athletic achievements. Many times she won the highest laurels in various tournaments – both in Poland and abroad. Among the trophies she won is e.g. the Cup of the Polish Champion, ITF Junior, Tennis Europe. Martyna has also reached the semi-final of the doubles tournament at the famous IMG Tennis Academy in Bradenton, Florida, where the prestigious Eddie Herr International Junior Championships are held.

In this young player not only her trainers see an competitive potential, but also such sports authorities as e.g. Wojciech Fibak. She plans to participate in the Grand Slam in the future and join the elite group of the world's best tennis players.

Martyna has a chance for a great sporting career. Seeing this potential, as well as her hard work and the power of her dreams, we are happy that we can follow her progress and achievements, supporting and encouraging her on the way.

We will keep you updated on the career development of a talented tennis player.

The attached photos show Martyna during the Ex Plisen Babolat Cup tournament in the Czech Pilzno, which took place between June the 27th and July the 1st this year.

We wish success to the young player! 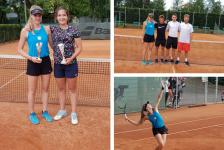